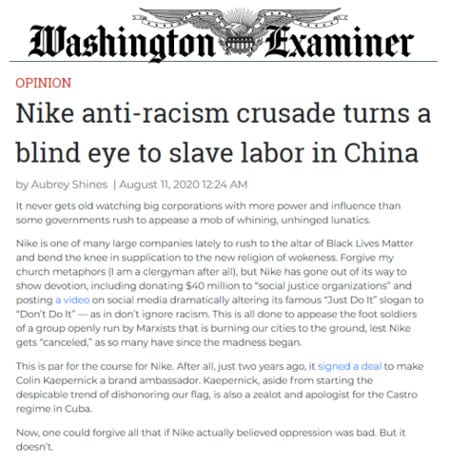 It never gets old watching big corporations with more power and influence than some governments rush to appease a mob of whining, unhinged lunatics.

Nike is one of many large companies lately to rush to the altar of Black Lives Matter and bend the knee in supplication to the new religion of wokeness. Forgive my church metaphors (I am a clergyman after all), but Nike has gone out of its way to show devotion, including donating $40 million to “social justice organizations” and posting a video on social media dramatically altering its famous “Just Do It” slogan to “Don’t Do It” — as in don’t ignore racism. This is all done to appease the foot soldiers of a group openly run by Marxists that is burning our cities to the ground, lest Nike gets “canceled,” as so many have since the madness began.

This is par for the course for Nike. After all, just two years ago, it signed a deal to make Colin Kaepernick a brand ambassador. Kaepernick, aside from starting the despicable trend of dishonoring our flag, is also a zealot and apologist for the Castro regime in Cuba.

If it did, maybe it’d be more concerned by what’s happening now in China. Not only did America not invent slavery and oppression, but it turns out it’s happening and being perfected in China through the systemic persecution of the Uighur community.

In case you hadn’t heard, the communist Chinese government has detained over a million Uighurs, a Turkic-speaking, mostly Muslim ethnic group, in what have been pleasantly described as “reeducation camps.” Because they predominantly follow Islam and speak a different language, the premiers in Beijing apparently thought it would be a great idea to lock up the Uighurs in concentration camps. And according to research conducted by Congress and the Australian Strategic Policy Institute, thousands of imprisoned Uighurs have been forced into slavery in factories that make products for popular brands including — you guessed it — Nike.

Read the full Opinion at: https://www.washingtonexaminer.com/opinion/op-eds/nikes-anti-racism-crusade-turns-a-blind-eye-to-slave-labor-in-china