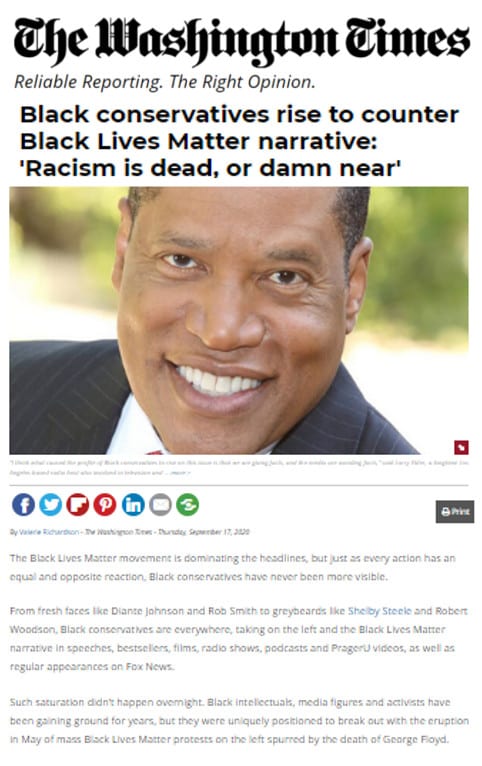 In The Washington Times’ piece by Valerie Richardson titled “Black conservatives rise to counter Black Lives Matter narrative: ‘Racism is dead, or damn near,'” Conservative Clergy of Color’s new diversity training alternative “Getting to All Lives Matter” was discussed:

New organizations are emerging. Four years ago, Mr. Johnson launched the Black Conservative Federation with a focus on Millennials. In 2018, Ms. Owens and Mr. Tatum launched the Blexit Foundation and the #Blexit hashtag, part of an effort to lead a “black exit” from the Democratic Party.

In June, Black pastors founded Conservative Clergy of Color to “call out the systemic racism that lies in the heart and history of the Democratic Party,” and released on Wednesday a corporate diversity training alternative called, “Getting to All Lives Matter.”

In a letter to federal officials using “white fragility” diversity programs, CCC co-founder Bishop Aubrey Shines said that the theory “pushed by self-proclaimed cultural scholars is only going to spread more divisiveness and distrust among your employees.”

“You are spreading lies that one ethnicity is inherently evil, and moreover, you’ve adopted these teachings out of fear, which is the worst kind of incentive,” said the letter.