Rush Limbaugh Show: Rush Condemns the Identity Politics That Drove Will Smith to Pull His Movie from Georgia 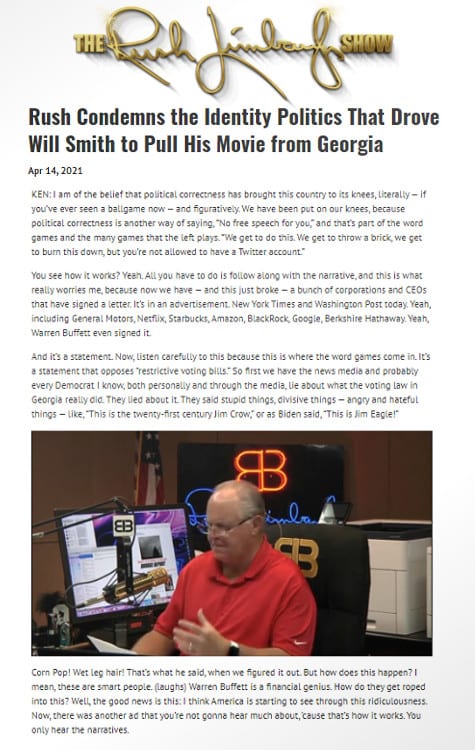 KEN: I am of the belief that political correctness has brought this country to its knees, literally — if you’ve ever seen a ballgame now — and figuratively. We have been put on our knees, because political correctness is another way of saying, “No free speech for you,” and that’s part of the word games and the many games that the left plays. “We get to do this. We get to throw a brick, we get to burn this down, but you’re not allowed to have a Twitter account.”

You see how it works? Yeah. All you have to do is follow along with the narrative, and this is what really worries me, because now we have — and this just broke — a bunch of corporations and CEOs that have signed a letter. It’s in an advertisement. New York Times and Washington Post today. Yeah, including General Motors, Netflix, Starbucks, Amazon, BlackRock, Google, Berkshire Hathaway. Yeah, Warren Buffett even signed it.

And it’s a statement. Now, listen carefully to this because this is where the word games come in. It’s a statement that opposes “restrictive voting bills.” So first we have the news media and probably every Democrat I know, both personally and through the media, lie about what the voting law in Georgia really did. They lied about it. They said stupid things, divisive things — angry and hateful things — like, “This is the twenty-first century Jim Crow,” or as Biden said, “This is Jim Eagle!”

So that’s in the New York Times and the Washington Post and all these people, “Well, we better… We better advertise so everybody thinks we care deeply, and we’re all woke and everything. Okay?” But nobody’s talking about the group of black ministers and pastors. They published a full-page ad against the Biden administration and former Georgia gubernatorial candidate Stacey Abrams because they said they were…

Stacey and Joe — if I can call them that. They feel like friends, don’t they? Stacey and Joe have been lying through the teeth about the law. It actually makes things easier for people to vote, easier than Colorado, where the Major League Baseball moved, right? The majority of Americans support voter ID. Seventy percent of black voters support voter ID. That’s not important. It’s not part of the narrative.

Read the story at: https://www.rushlimbaugh.com/daily/2021/04/14/rush-condemns-the-identity-politics-that-drove-will-smith-to-pull-his-movie-from-georgia/