NEWSWEEK: ‘Woke’ Christians Are Eroding Donald Trump’s Base and Dividing the Evangelical Church 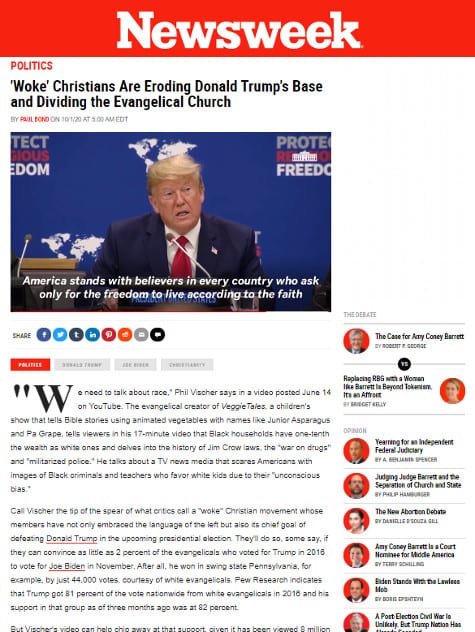 “We need to talk about race,” Phil Vischer says in a video posted June 14 on YouTube. The evangelical creator of VeggieTales, a children’s show that tells Bible stories using animated vegetables with names like Junior Asparagus and Pa Grape, tells viewers in his 17-minute video that Black households have one-tenth the wealth as white ones and delves into the history of Jim Crow laws, the “war on drugs” and “militarized police.” He talks about a TV news media that scares Americans with images of Black criminals and teachers who favor white kids due to their “unconscious bias.”

Call Vischer the tip of the spear of what critics call a “woke” Christian movement whose members have not only embraced the language of the left but also its chief goal of defeating Donald Trump in the upcoming presidential election. They’ll do so, some say, if they can convince as little as 2 percent of the evangelicals who voted for Trump in 2016 to vote for Joe Biden in November. After all, he won in swing state Pennsylvania, for example, by just 44,000 votes, courtesy of white evangelicals. Pew Research indicates that Trump got 81 percent of the vote nationwide from white evangelicals in 2016 and his support in that group as of three months ago was at 82 percent.

“The civil rights movement is being commandeered by leftist ideologues who want to prostitute black and brown pain for perverse politics. A lot of it is election fodder,” said Francisco Vega of the Awakening & Reformation Center in Smyrna, Georgia, who is a member of Conservative Clergy of Color.

“We have tremendous concern with critical race theory, given its stake in Marxist ideology and historical revisionism, ignoring how we have progressed as a nation and risen from the ashes of the Civil War and Jim Crow,” said Vega. “Critical race theory says racism is a systemic stain that can never be washed from the foundation of America and the whole system must be taken down and reset.”

Read the story at: https://www.newsweek.com/woke-christians-are-eroding-donald-trumps-base-dividing-evangelical-church-1534720