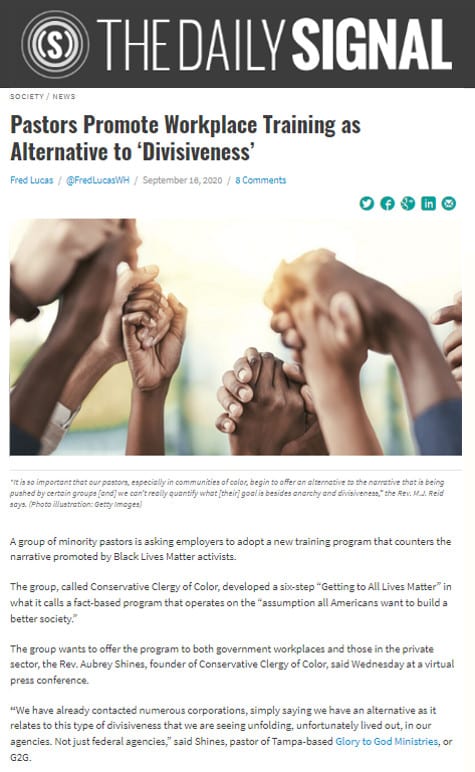 A group of minority pastors is asking employers to adopt a new training program that counters the narrative promoted by Black Lives Matter activists.

The group, called Conservative Clergy of Color, developed a six-step “Getting to All Lives Matter” in what it calls a fact-based program that operates on the “assumption all Americans want to build a better society.”

The group wants to offer the program to both government workplaces and those in the private sector, the Rev. Aubrey Shines, founder of Conservative Clergy of Color, said Wednesday at a virtual press conference.

“We have already contacted numerous corporations, simply saying we have an alternative as it relates to this type of divisiveness that we are seeing unfolding, unfortunately lived out, in our agencies. Not just federal agencies,” said Shines, pastor of Tampa-based Glory to God Ministries, or G2G.

“We are seeing it in the athletic realm, in various corporations that are indoctrinating employees to what we believe is something that has no historical basis, that requires historical revisionists to speak to these types of issues,” he said.

Many corporations, particularly in light of the demonstrations and riots sparked by the May 25 killing of George Floyd at the hands of Minneapolis police, adopted diversity training programs based on “white fragility” theories presuming an “implicit bias,” according to Conservative Clergy of Color.

Both such training and the lecture circuit on anti-racism issues  reportedly has become lucrative for white academics.