Christian Headlines: BLM has made “no secret about their agenda” in recent times. 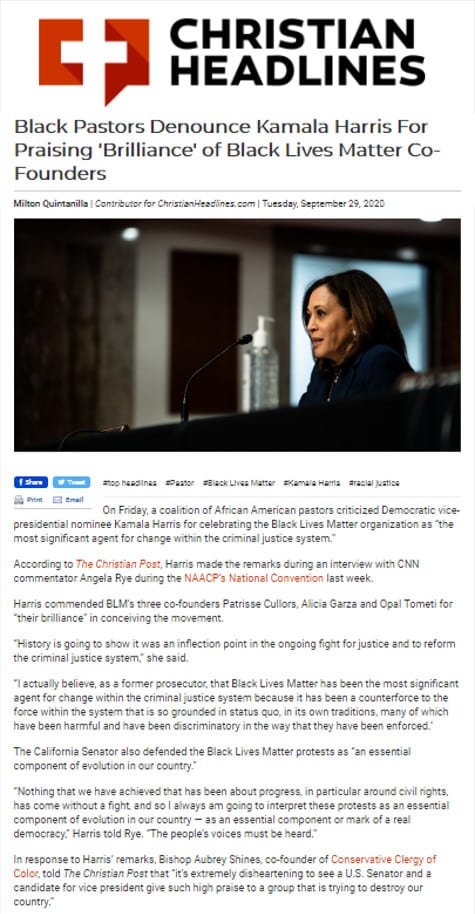 On Friday, a coalition of African American pastors criticized Democratic vice-presidential nominee Kamala Harris for celebrating the Black Lives Matter organization as “the most significant agent for change within the criminal justice system.”

According to The Christian Post, Harris made the remarks during an interview with CNN commentator Angela Rye during the NAACP’s National Convention last week.

“History is going to show it was an inflection point in the ongoing fight for justice and to reform the criminal justice system,” she said.

“I actually believe, as a former prosecutor, that Black Lives Matter has been the most significant agent for change within the criminal justice system because it has been a counterforce to the force within the system that is so grounded in status quo, in its own traditions, many of which have been harmful and have been discriminatory in the way that they have been enforced.”

The California Senator also defended the Black Lives Matter protests as “an essential component of evolution in our country.”

In response to Harris’ remarks, Bishop Aubrey Shines, co-founder of Conservative Clergy of Color, told The Christian Post that “it’s extremely disheartening to see a U.S. Senator and a candidate for vice president give such high praise to a group that is trying to destroy our country.”

“Does Sen. Harris not watch the news? Has she not seen the businesses burning, the livelihoods that have been wrecked by this organization? People are terrified, but we have to praise the organizers because it’s the cool thing to do,” he said.

Shines noted how BLM has made “no secret about their agenda” in recent times.